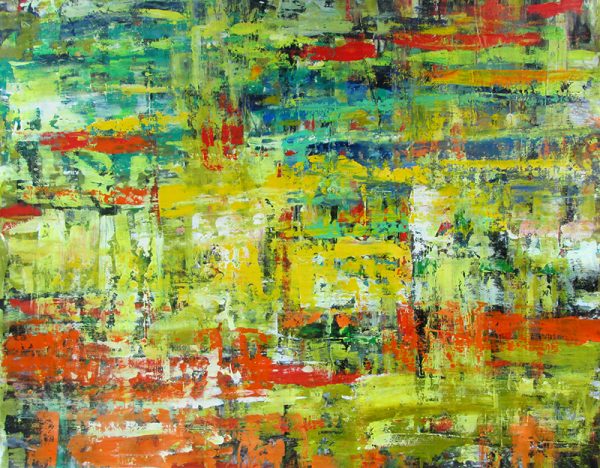 Views from a moving train are represented in suitable colours. Large size of canvas also gives a great view of the imagination.

hese works appear serendipitous but are done painstakingly.  Instead, there is great diversity in their form, gesture, and colour.  Fundamentally, these are essays in freedom and rhythm.  There is expansiveness as well as a sense of containment; fiery introspection as well as a cool and clear-eyed observation of the forms.  Some of the works are so vivid that they appear to be alive, on the pictorial surface, leading the eye into mysterious and wonderful places.  These paintings are more about resolutions within the paradigms of abstraction, figuration and colour.

Prasanta Acharjee an abstract artist from Kolkata, India studied in Diploma in paintings from Indian Society of Oriental Arts and practicing since 1997. In my works there is a quest for the absolute, a higher meaning, in which art is seen as a manifestation of universal laws rather than mere individualistic expression. These highly refined and elegant visual arrangements express certain physical and psychological dualities in a manner which is both magical and alchemic and achieved using a perfect balance of opposing elements: dark and light; masculine and feminine; modern and traditional. They convey a sense of infinity and totality, one in which the visual protagonists convey powerful poetic, spiritual and universal ideas.
These works appear serendipitous but are done painstakingly. The gestures are akin to signatures and derive partly from a fine sense of draughtsmanship although it is folly to try to attribute specific meanings to them. Some are chimeras, ghosts within the image which seduce and entice the viewer. There is, however, no repetition in the works; instead, there is great diversity in their form, gesture, tempo, cadence and colour. Fundamentally, these are essays in freedom and rhythm. One can formulate several dialectics in these paintings. There is expansiveness as well as a sense of containment; fiery introspection as well as a cool and clear-eyed observation of the world. Some of the works are so vivid that they appear to be alive, lines dancing on the pictorial surface, leading the eye into mysterious and wonderful places. These paintings are less about conflicts and more about resolutions within the paradigms of abstraction, figuration and colour.
Apart from that won many many Awards, participated in many Group shows, Solo Exhibition, Art camps as follow.
Participations :
Group show on Frida Kahlo, curated by Gallery Art Exposure, Kolkata Jule 2018
Solo Show at Tejas Art Gallery, Kolkata 2015 – curated by the Tejas Art Gallery
Solo Show at Shrimati Art Gallery, Kolkata 2012 – curated by Anirudh Chari
Solo show at Gallery Picture Perfect at Gurgaon in 2001
Two man show at Gurgaon in 2001
2nd Friendship Art Exhibition in Dhaka, Bangladesh 2009
Expressions East and West, Group show at Islington Art Factory, London September 2011
Group show at Blue Art Gallery, Delhi 2012
Group show at Art Value Gallery, Delhi 2012
5 Group shows by “IMAGINATION” at Academy of Fine Arts (’98-‘01) & Gorky Sadan ‘04
1 Group show by “ RAPPORT” at Indian Museum Hall’ in 2003
8 Group shows by “Expression” at Calcutta Information Centre, 2005, G. C. Laha Fine arts Gallery, 2006, Bangladesh High Commission, 2007, Gallery’79, 2007, Academy of Fine Arts, 2007,
Birla Academy of Art & Culture, 2009, 2011, Renaissance Art Galerie 2011
5 Group shows by “ KOLPO”
Exhibition of Paintings by INFAC at Academy of Fine Arts,
“Durga” Exhibition of Paintings at Spectrum Art Gallery, 2008
“Symphony in Art & Music” Exhibition organised by ArtBorderLine, London – 2009
Exh at ICCR, Kolkata – organised by art4u, 2009
“Durga” Exhibition of Paintings at Bimal Mitra Art Gallery, 2011
“Ganesh” Exhibition of Paintings at Artist Circle Art Gallery, 2011
Participated in all major Annual exhibitions of Paintings in Kolkata
NIV Saturday Show, at NIV Art Centre, Delhi. December 2013
Awards :
Lilavati K. Shah Memorial Medal, All India Annual Exhibition of Indian Society of Oriental Art 1997
Santosh Kumar Chongdar Memorial Medal, All India Annual Exhibition of Indian Society of Oriental Art 1999
Art Camps :
Art Camp in Dhanbad, organized by Forest Department, 2008, 2009, 2010
Art Camp in Kolkata, organized by INFAC, 2008
Art Camp at Balasore Art College, 2010
Collection : DLF – Delhi, Alliance Francis Du Bengal – Calcutta, Gurgaon, Delhi, Singapore, USA, London, Brazil

you are ordering through our website artsutra.co.in, artist that fulfil and ship its own inventory (also called a seller), In case of return, you need to update within 24 hours after receipt of the delivery. your return is sent back to the seller instead of Artsutra Creations LLP.